I am away for a little while, and I wasn't sure what I would find to write about during this trip to the West coast. What I found on the first leg was quite a treat, though, so I figured I'd pass on some of those notes. We were in Mendocino County, California, a few hours north of San Francisco, south of the Redwoods National Park, and along the coast. Having flown into Sacramento and driven nearly four hours to get to the hotel, we had already seen an incredible variety in landscapes.
North of Sacramento everything was agriculture. No surprise there, of course. But, a surprise to me was how big the fields were and how few inhabitants. Where in Central Maryland, the countryside is dotted with small farms and farm buildings, while not close together, aren't that far apart either. Guessing measurements is certainly not my strong suit, but I figure in Carroll County, even in heavily farmed area, you have farms that are 5-100 acres and houses along them. Not the case in this part of northern California. The sunflower, corn, and grape fields stretched out as far as the eye could see and along Interstate 5 going north, we were surprised by the occasional farmhouse or other building. This is BigAg.

The other thing that was interesting was that it was farm land at all. What wasn't part of the crop fields was bone dry brown in color. And the hills to our West were clearly high desert. Brown and full of low lying scrubby bushes, or simply bare ground. I didn't see large overhead irrigation systems, but there must be massive irrigation to make those crops work. The sunflowers had all gone to seed and were dying down, but there were large orchards, corn fields, grapes, beet fields, and other things we didn't recognize at 65mph.

We turned West and headed over the mountains that separate that flatland from the coast. Another hour or two of windy roads, and we suddenly found ourselves on the edge of green and Redwood trees. Logging trucks started passing by. Making our way through the shaded forest, we finally came out into the sunlight again and directly into Pacific Highway 1, running North-South along the coast. We had made it to Fort Bragg and Mendocino County.

A quick stop into the visitor's center. We were met by signs that said "Buy Local. Think Local. Be Local. Mendocino County." And brochures for "America's Greenest Wine Region". Lots of organic restaurants. and advertisements for the coast's farmer's markets. In a few days, we were able to check out a little of the wine region, the farmer's market, and discover local candy cap mushroom ice cream.

According to the advertising, the Mendocino wine growers are proud to grow sustainably and organically. Their figures state that in 2008, 22 wineries use sustainable practices, 28 grow organically, and 20 are certified organic, six are certified biodynamic, ten are fish-friendly certified (nope, no idea what that means), and one uses 100% solar energy. We drove to one of the county's wine appelations, the Anderson Valley, to check it out. Not wanting to subject the family to too much wine tasting, we just headed out in the car and checked out three wineries based on their name or the look of the tasting room as we went past.  I wasn't sure what to expect of this region, and given all the Big Ag was saw near Sacramento, I figured there would be a lot of Big Wine. Wrong. 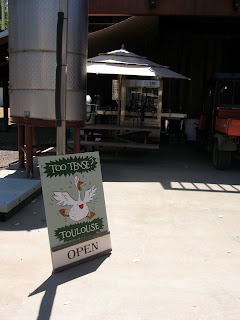 Our first stop was Toulouse Winery, pronounced "Too Loose". We chose it because it had a cool duck motif on the sign, which later we discovered was meant to be a goose. It was still cool. This is a very small winery in great environs. They make about six wines, using their own or other Anderson Valley farmer's grapes. The area terroir is similar to the Alsatian area of France, so the primary grape is Pinot Noir, and there is a lot of Muscat and Gewurztraminer. We also saw Riesling and Zinfandel at each place, with some Pinot Gris. Toulouse Winery doesn't take itself too seriously. It has adorable t-shirts with the duck/goose in a frenzied pose that say "Too Tense? Toulouse Pinot Noir", and another with a drunken goose holding a wine glass, "Got Too Loose." But their wines were good too. I'm not a huge Pinot fan, but I did like all the ones I tried that day reasonably well. They all seem to make dry muscats, which were indeed dry, but still tasted like muscat; not my favourite. I found a few good Zins and Sauvignon Blancs along the way.

Our second stop was the larger Navarro Winery, or at least it feels larger. It feels more commercial, and I think indeed, it is larger. But they too only sell direct. And they don't ship to Maryland, unfortunately. They have a slightly larger selection of wine, and they sell gewurztraminer and pinot noir grape juice, which are fabulous. All of these wineries were kid friendly, offering them their own drink of some kind or another. The estate grown Pinot Noir at Navarro was absolutely fabulous. They were selling futures on the current vintage, which would be available in 2012 for pick up. Something I hadn't seen before. Large gardens outside gave kids something to do after they downed the grape juice.

Finally, we ended up a Handley Cellars, a woman-founded and owned winery over 30 years in business.  The vintner and co-owner, Milla, is featured in the book Women of Wine. They have some certified organic fields, and they have been practicing organic since the beginning. I asked about how they handle fungus issues, which seem like they would be huge in an area that gets so much fog. She said they use sulfur, which is okay for organic gardening, and that this year, they have had to because it has been so cold. They get grapes from the Anderson Valley, but they also grow in Sonoma and incorporate those into their wines. Like the others in the Anderson Valley, they were heavy on the Pinot.  The woman helping us heard we were in Fort Bragg, and recommended we try the local candy cap mushroom ice cream there. So, off we went.

Cowlicks is a handmade ice cream on Main street in Fort Bragg. It has a huge array of flavours, but the most intriguing was definitely ice cream made from locally grown candy cap mushrooms. It tastes like maple. Exactly like maple. Except there are small pieces of mushrooms in the ice cream, so you are aware it's not maple. This place was like a few other places we ate in the area; full of good vibes.

On Wednesday, we visited the Fort Bragg farmer's market. Similar in size to ours in Westminster, it was clearly an attraction for locals and tourists alike. I wasn't sure what to expect, because the Mendocino coast sure doesn't look like a place you can grow food. I think several people had come from further inland, but within 30 miles range. They are behind us in the growing season, with farmer's offering the last of the strawberries and the first of the blueberries for the year. There was tons of garlic - I think I saw six varieties - and at great prices. I almost went home with a brade of fifteen large heads for twenty bucks.  One organic farm from Fort Bragg boasted potatoes grown without irrigation. Another woman, from Pacific Preserves, made a fabulous lemon ginger marmelade. She said she tries to get her fruit as local to "her" as possible; her parents, living in southern california and florida grow her lemons! Another interesting stall was that of the Noyo Forest Farm, a community farming group that teaches children and adults organic, sustainable farming practices in the town and runs demonstration gardens.

Also along the rugged coast there, we visited the picturesque town of Mendocino where I found these itsy frogs littering the leaves of some kind of salva flower (I think). They were so close in color to the leaves, you hardly saw them. 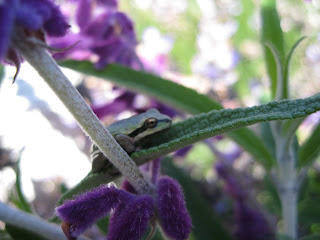 We headed north to the Redwood National Park yesterday. A stop in Garberville at Getti Up Coffee and Cattle company for a quick bite to eat: country music blaring on the outdoor speakers, the wind-driven water pump for the fish-in-a-barrel-pond, drive up espresso (of course), and a sign on the door "our beef is all local, grass-fed, and never frozen." Now that's a tall order. 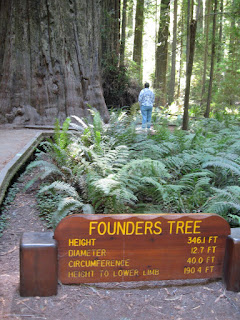