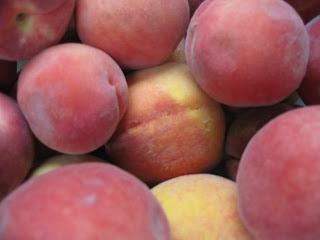 Can you ever have too many fresh local peaches? It turns out, maybe you can. Last weekend my son and I headed out to the local pick-your-own farm to stock up on peaches. They had a few varieties of white and yellow peaches in season, and they listed the picking as being excellent.  The perfect time to grab a bunch to preserve for the winter season. This is our first summer picking and preserving fruit on any scale. Last year we made a wide range of pickles, and our cans of pickles lasted us exactly through the year. We are on the last one now. And, in years past, I have made various jams or jellies on a small scale.

But this year, as I've tried to stretch myself further in living locally, I decided to pursue fruit. In late June, we picked and froze forty pounds each of sour cherries and blueberries. The picking was abundant, but still  very time consuming. I think we spent two sessions in excess of three hours picking all those berries. And then, thank goodness for young children, my son spent several hours pitting each and every cherry. But, overall the cherries and blueberries weren't too much of a challenge. We canned a few batches, and froze most of them. It was clearly time to try peaches.

So, the thing about picking abundant peaches is that they are abundant. And quick to pick. So your bag fills fast. We picked on the order of 70-80 lbs of fruit in one and a half hours. That's good in saving your time, but it means you have a lot of fruit to deal with quickly. Still, this is what we were looking for. Peach hoarding. Our other challenge was getting the right fruit. At Larriland farms, they have staff at each field eager to help you identify the right things to pick. We stared at examples of good fruit and bad fruit. But in the heat of the sun, bent under the dense branches of the tree, those images seem to vanish. I kept asking myself, is this yellow (good) or pale yellow (bad) ? It's not got green undertones, has it?  I was lulled into a false sense of security by deep red tones covering many of the peaches. So, in the end, maybe three-quarters of our pickings were mature peaches, and the rest were not. And though the immature peaches will  soften (read: bruise) off the vine, but not sweeten, this didn't bother me too much. I figured, they have more natural pectin and are great for preserves in that fashion. and you can always add sugar.

In any case, we arrived a few hours later back at the house with maybe two bushels of peaches. We promptly moved on to other activities. The next day I decided I better get cracking and start saving the peaches for the season. I figured I would mostly freeze them, but also do some canned preserves for quick desserts and breakfast foods. Then I looked at the peaches. I'd left them in their bags and neglected to think through the consequences of that (in-)action. By the end of two days, they were already showing signs of distress with squishy parts on many and a few being reshaped into cubes. Ack! My hard work and money vanishing, we decided to spread them out onto a surface until I could start working on them after work. They took up our large dining table and the kitchen island entirely. That's a lot of peaches.

Before dawn that morning, I had also begun blanching, peeling, and pitting the peaches for the freezer. This really wasn't that bad. I could blanch about eight at a time in my large stock pot, and without too much difficulty then, peel them, roll them in ascorbic acid to keep them from browning, and drop them in a bowl. Still, eight peaches took probably ten minutes to process from peach to bowl. I began working again in the evening, and after what seemed like hours, I looked up and saw peaches still covering the table. And I thought to myself: you've really gotten yourself in over your head this time. I kept at it: boil, chill, slice, peel, crack open, remove pit, roll in fruit saving goo, toss in bowl, repeat. Fill bowl, grab freezer bag, fill bag with single layer, remove as much air as possible, toss in freezer. repeat. And I thought again: You've really gotten yourself in over your head this time.

At some point, I came to realize, there simply was no way I was going to peel and freeze all of these peaches fresh. Something had to give. I ended up trying a bunch of things. First, with the white peaches being so mild in flavour, I had already decided they would best be used for fruit sorbet. I don't think they'd cook out that well in a pie or anything. (tell me if I'm wrong). So, with several pounds of them, I blanched them for a minute, chilled, and tossed them unpeeled, whole, into freezer bags. We'll see how that goes. I expect the pit to start imparting an almond flavour soon, but I'll also use them soon.

Next, I moved to compote. Halve and pit the peaches, add a bit of lemon juice, cranberry juice, and cook  until soft. Most of the skins just fell off themselves then into the sauce. I could separate them, cover the cooked peach halves with the red sauce, and freeze the beautiful looking peaches for fancy desserts. That was actually quite easy. But I only had so much cranberry juice around. I looked at the table: peaches. I looked at the clock: coming to ten pm.

Plan C. Slice the peaches, don't peel, don't pit, don't really halve them even. Shove them into a giant stock pot, add a little lemon juice, and go upstairs. Come down later, remove the fallen skins and pits. Smash the peaches. I now had a chunky mass of yellow and white peaches. A large mass. While the freezer is huge, I decided I really should can these. So I shoved them in the fridge and finished the canning last night. The mash yielded six pints of peaches for snacks and desserts.

But, naturally, that's not all ! I had grilled twelve yellow peaches with the plan of making peach salsa and  either freezing or canning it. So last night I scrambled to finish that up, combining the peaches with tomatoes and hot peppers. Freezing had worked well a few weeks ago, but I decided with this much acidity to try canning. The canning part worked fine; they are all sealed and cooked a long time. Whether canning them as a fresh salsa was the right thing to do, I'm not sure. We're going to have to wait and try it.

But now I am done. We have plenty of peaches to last us through the winter. They are local. We picked them ourselves. All cool things in my book. Next year, I'll try and do it in stages.

If you are interested in getting organic peaches in Maryland, I think that is tough. I've done a little research and been unable to find anyone who grows peaches, or most any other fruit, chemical-free in or around the state. I think the humidity here causes serious problems with disease. Of course, you could grow your own and that would be much more manageable. But i don't have the right land for that. And personally, I prefer buying local than getting organic fruit that was carted half way across the world. I am as concerned, personally, about the carbon footprint of the transportation and the local economy as I am about chemicals. So, I do what I can. In small batches, I buy from farmer's who only spray trees before they fruit. But to preserve for the season you need scale, and that means pick-your-own to me. There are lots of places to do that. I've chosen Larriland Farms in Howard County because they use Integrated Pest Management (IPM), a service that uses chemical control only as dictated by an expert who inspects the fields every 7-10 days for oncoming issues. You can find them at www.pickyourown.com.