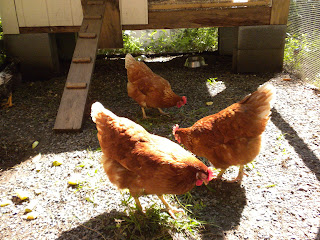 Chickens have certainly been in the news a lot lately, and so I thought I would add to the frenzy and write a little about our experience with local chicken farming, both for eggs and meat. I think I was first exposed to writing about pastured chickens through Michael Pollan, though it could of been a number of other authors. It was some time before I actually had a real local farmer's egg. I had read that the eggs were much richer in color and in taste, and that the yolks seemed to stand more boldly from the raw whites. That all sounded great, but my interest was really piqued by the topic of the last month or so: salmonella.

In Italy, we had been taught to use raw eggs for the dessert, tiramisu. We asked them at the time about getting sick from raw eggs, and they assured us that it wasn't possible. Our cooking instructor showed us a number stamped to the bottom of our eggs and said that this guaranteed they were safe. In truth, I have no idea what those numbers meant or whether the European Union has any better luck with raw egg-borne illness. But we didn't get sick, either.  With concern over consuming raw eggs back here in the States, we tried to find alternatives. The primary suggestion for this and similar uses of eggs is to actually cook the eggs to kill any bacteria in what was called a custard. I read the directions carefully and decided that it required far more work than I was willing to put in, not to mention a level of skill I was sure not to have. I turned to purchasing "cage free" eggs from the supermarket thinking that they must be better. Maybe they are; I'm not quite sure. But I did come to realize through further research that the words "cage free" didn't really mean what I thought (like, without a cage) and the cost for the label seemed unreasonable. The eggs might be a bit darker than the average supermarket egg, but I certainly wasn't overly impressed. Then a few years ago, we joined a CSA (community supported agriculture) at Ceilidh Meadows Farm in Gamber, Maryland, owned by Donna and Charlie Hancock. Ah, we would get to experience all the cool things I'd read about that connected people with other people through local farming. Sure enough, the first morning that I pulled up their long driveway to pick up our weekly produce, the yards was filled with wandering chickens. This was a bit unnerving for me, but didn't seem to phase the chickens. The colors of the animals were remarkable, and they completely challenged my image of the white egg layer chicken. When we got home that afternoon, we cracked the remaining store bought eggs right next to Donna and Charlie's eggs. The difference was stark. They weren't just darker, they really were deep orange. And the flavor was much stronger. It was a great introduction to a new way of living.
About the same time, our friends Maureen and Mike decided they too would raise chickens. Really? People I knew didn't raise chickens. At least not at the time. But they soon had three layers in the coop they built on the edge of their yard. (Those are the ones in the photo at the top of this entry. )

Soon after that, it seemed that chicken raising, for the purpose of eggs, was all in vogue. A Washington Post article highlighted the growing trend of urban chicken coops. These aren't exactly what the Hancocks have on their property. At the Hancock farm, the chickens and roosters are just roaming. Sometimes they get off the property, and sometimes they get killed. During our Summer in their CSA, more than one chicken hid and kept their eggs, giving birth to a new set of chicks for the flock. The urban set up is a small cage, though it seems that frequently people move the cage about the yard to have the chickens aerate the soil. Our friends too didn't have free running chickens; when theirs were out of the coop and adjoining caged yard, they were supervised. The chance of a fox or raccoon getting them seems to great to them. Maureen started getting old organic produce from markets for the chickens, giving them a much wider variety in their diet. And the eggs became deeper in color and taste all the while. And just good ole egg "look"... they recently won a blue and red ribbon at the Howard County Fair for their eggs appearance. The kids are in the mix, collecting the eggs and helping feed the group. Not to mention, picking them up at random and carrying them about the yard; chickens seem more amenable to three year olds than the average dog. Their flock has grown too. Maureen has adopted the chicks that the kid's elementary school hatches for science. And when a few of those turned out to be roosters, she found them a home at White Rose Farm where they could grow old crowing. Now the family have around 10 chickens laying every day. That many eggs adds up fast. But the great thing is that others like myself are quite willing to pay for eggs like that. Maureen and Mike are saving those proceeds to build another coop for meat chickens…. and a whole new adventure. 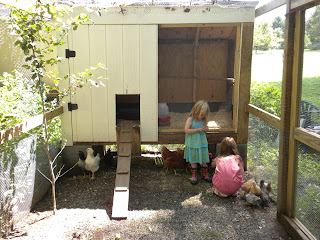 At the time Maureen picked up their first set of chickens, I had never heard the term "layer". I had no idea that egg laying chickens weren't exactly the same as chickens used for meat. No idea that the timeline and setup for these two kinds of chickens are completely different. In fact, a little bit of research revealed that the number of farmers providing eggs in the area far exceeded the number offering meat.  I had read that aside from a wide range of environmental and economic pluses, free range chickens tasted richer than those from the big Purdue and Tysons farms. Documentaries on these giant industries have proliferated in the last few years, and an understanding of the unsavory practices against both low-income farmers and the animals themselves, among other things, has widely grown in the community. In many cases, these farmers, particularly those in the rural south are akin to indentured servants, pouring massive investments into an uncertain future. There didn't seem to be ton of evidence that the big organic companies were a ton better; better, granted. Somewhere along the line, we decided to opt out. I had read about Joe Salatin's farm in Virginia, again, I think, through Michael Pollan, and was sure there must be similar set ups in Central Maryland. His farming practices seemed ideal all around, and we were willing to pay extra for all the perceived benefits.
The first farm we purchased from was Jehovah Jirah, in Washington County. We were thrilled with the product. Is it different from store bought chicken? I recall that I thought so at the time. Since it is all I've eaten for a long time, it's now all I know. But, I recall our group conversations shortly after we got our first order. It seemed that the meat was a bit more "gamey" than the average bird, and their chickens were also a bit smaller. Since then, we've purchased from several farmers and have found sources within Carroll County. I have also learned that there a number of varieties raised, yielding different characteristics. One of our primary sources for the past year is Michael Akeys of Green Akeys Farm outside Westminster. He has raised at least three varieties in that past year, heritage and "commercial" breeds. He recently likened the more commercial Cornish Cross bird to a couch potato: the birds will sit at the grain bin all day and ignore the huge pasture they have at their disposal. Apparently the Freedom Ranger is a better breed, still having a decent amount of meat on their bones, but willing to get out and stretch their legs! Michael isn't convinced that the true heritage chickens are the way to go. These older birds tend to be smaller, with much less meat, particularly breast meat, on them, and they just aren't as popular with customers, he says. As a customer, we did find the heritage birds we purchased last year a bit small and found nothing superior in their flavor. So, we're quite happy with his decision to grow Freedom Ranger, and we're really glad that he is experimenting and evaluating along the way. Interestingly, he and his family have only been farming a few years, having decided to take the plunge and buy a 62-acre farm after finding the eggs from the CSA they joined four years ago so fantastic. That's an amazing transition from consumer to supplier, and I plan to write an entry on the family farm soon. In the meantime, here's their blog.
The difficulty for the average consumer in purchasing from farms like JJ and Green Akeys is that it takes planning. You generally need to order in advance. Birds are only "processed" every several weeks. So it certainly isn't as convenient as dropping by the local store. We tend to buy a bunch at one time, which will tie us over for a few months at a time. But there are others options. Many farmers markets have one or two vendors selling directly. This allows people a chance to buy each week what they need.  At the Westminster Market, I buy from Scott of Sattva Farm in Frederick County. His chickens are certified organic and taste great, but he's not on the Net much. To find Scott, you want to find your way to the market.
Posted by Unknown at 12:47 PM