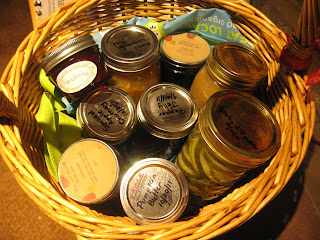 So, this past weekend I got invited to a local canning swap and trade party. I know it sounds a bit weird or, well, domestic maybe, boring to some, old to others,.... dated maybe... but, this is the kind of gathering I've been wanting to join for some years. The idea is that you can things during the harvest season, either by yourself or in canning parties, and then bring a bunch of canned goods for others to taste. At the end of the event, all the unopened cans are laid out and folks fill their baskets with roughly what the number they brought in. There were six of us on Sunday. I took ten jars and came back with ten jars, only two of which were mine. Not bad.

The reason these types of trades are so intriguing to me is, aside from the whole aspect of socializing with others who do arcane things, the sheer variety you get without being overwhelmed. If you are canning alone in your kitchen, just you and your pot of boiling water (I'm cheap and don't own a pressure canner), even with small batch canning, you'll end up with 4-8 jars of whatever you make. Let's say eight. So if you make six half pints Apple Ginger Chutney, that's actually a lot of chutney to consume over the year. Of course, you can gift these things, and sometimes I do. But, let's be honest, the vast majority of folks have no appreciation of the amount of work that went into making that unusual chutney. Some will avoid opening it, instead waiting for the right special occasion where chutney calls out to them and they have all the right guests and all the right china on the table. Or, in all likelihood, they have no idea how one would eat chutney; isn't that some weird foreign food? So I'm leery of gifting unusual recipes even though I might just love to try a jar myself.

I'm quite generous, I think, with my canned goods and other things I make, as long as folks will appreciate them. I can see my little Golum coming out, though, when I recognize that's not the case. This year life interrupted, and I was unable to get many sour cherries. The result: two pints of sour cherry jam. Nothing else. No frozen cherries. Nothing. My sour cherry jam rocks. And I know it's totally sad and selfish, but when folks who like Smuckers just as much are digging in, I have to hold down my inside voice... "it's mine, my precious".... and I might just be guilty of sliding that one to the back of the fridge and bringing my less-than-favorites to the front. The sins of a canner.

On the other hand, my hot pepper jellies are usually a big hit, particularly with folks who haven't paired them with cream cheese. I had so many request for jars last year that I made double this year to give to whomever wants them. Pepper jelly is so unique and one of the coolest ways to make a quick Real Food appetizer, I'm delighted that folks like it and glad to share.

In any case, when you make unusual recipes, you are often, well, I am often, stuck then with jars of unusual recipes. Luckily, last year my son absolutely loved the spiced blueberry cherry preserves in his yogurt. These were Fall spices, like cinnamon and nutmeg stewed into blueberries and sour cherries. It tasted good, I though, but four quarts good? Not for me. It took the year, but we did eat them all. Still, this year I went back to tried and true things.  Which means, when I got invited to this party to share, since I wasn't quite expecting it, I wasn't quite prepared either.

I brought garlic dill pickles, apple sauce, and pepper jelly. The first two are things most everyone makes. Most everyone makes a lot of. Not too exciting to swap. I also had one jar of lemon basil jelly, which was interesting.  The great thing is that these kind of parties usually involve generous people who are willing to try other folks stuff and appreciate the work involved, so I did pretty well.

For my part, I got to take a home a jar of Blackberry Lime jam, pumpkin butter, cranberry jam, pickled watermelon rind, a different pepper jelly, apple chutney, and bay leaf infused plum jam. Plus, I got a bit of pineapple sage butter. We tasted various breads that others made, and an apple cobbler. Not too shabby. And the group was all knitters, so we sat around, talked, and did that too...Bonus!
Posted by Unknown at 4:56 PM

Email ThisBlogThis!Share to TwitterShare to FacebookShare to Pinterest
Labels: canning