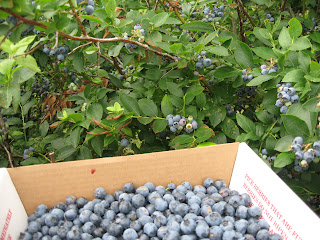 With our stores from last year nearly depleted, we headed to Larriland Farm in Woodbine this morning to do a little berry picking. Well, ideally, we would have done a lot of berry picking. The blueberry, raspberry, and sour cherries were all picking "good", according to the farm's website. The weather here for nearly two weeks has been a daily dose of grey punctuated by a little rain and a little thunder. This morning was no different, but we decided to head out anyway. Midweek mornings are certainly the best time to pick at a large pick-your-own place like Larriland.... last Summer we met a friend a few times around noon on a Saturday for picking. Wowza. The only thing you get is a little perspective of the life of an immigrant farm worker. My goal this year is to stick to mornings and whenever I can, midweek.

The blueberry bushes looked absolutely fabulous, spikes of grey-blue berries filled each bush. Unfortunately, it was deceiving. Many, if not most, of the berries were still a bit underripe. I'd guess in two or three days - like Saturday ! - they'll be fabulous and easy picking. There were lots of ripe berries but separating them from underripe ones by eye or feel is something I find difficult. Luckily, we don't mind a little tang. Still, I picked only 7lbs of blueberries, where I would have gone 15-20lbs if the picking were "excellent". Frustrated, we moved on after time to the black raspberries.

They were, on the other hand, picking "excellent". Black berries hung in huge bunches from every vine in row after row of berries. This leads to an almost impulsive picking frenzy, I think.... you say, I've got plenty, but then, making to leave, you see another beautiful bunch and, naturally, have to take that one too. So, we ended up with nearly 3.5lbs of raspberries, which have a much shorter lifespan than blueberries.

We like picking at Larriland. They have a mob of very courteous high school students working at each station and it's clear that it's a family business. They use Integrated Pest Management (IPM), which for the fruit means, there is definitely spraying going on, but hopefully through the expensive consultants they use, the chemical usage is minimized. We'll head back in the next few weeks to get more blueberries and stock up on tart cherries, then we'll go back again at the end of July or early August for peaches. Now that I've kept track of how much we stored and what we consumed (everything), I have a pretty good sense of what we should buy.


Given the pile of berries I had, I decided to try making some freezer jam this afternoon. Ok, in all honesty, I saw these cool looking freezer jam containers at the store and now I needed to use them. Besides, I was curious how we would like the taste of fresh jam, when we are so used to the cooked fruit jams. Hands down, the freezer jam wins on time. From start to finish, it took me 15 minutes (!!) to make and jar two half-pints of blueberry jam. Another 15 minutes for the black raspberry. And included in that time was running the fruit through the food mill to remove the seeds and skins. So, I actually made black raspberry jelly.  I never make jelly; way too much work.

In this case, all you do is crush your fruit. I ran through mine a food mill... the blueberry with a large opening to remove the skins and the raspberries with a fine opening to remove seeds. A few minutes later I had the requisite 1-2/3 cups crushed fruit. In a bowl, mix 2/3 cups sugar with 2 Tbsp of instant pectin. Add the fruit and mix by hand for three minutes. Pour into containers. Let set. Ta-da! Jam. It took about 30 minutes for a light set of the jam, and a few hours later, they have a nice thick consistency, better than I tend to get with canning.  You can probably do 4-6 jars at once, but I wanted to check this all out first, so I just did a few. Absolutely fabulous.


This post is part of Simple Lives Thursday !
Posted by Unknown at 2:10 PM

Email ThisBlogThis!Share to TwitterShare to FacebookShare to Pinterest
Labels: canning, Larriland Farm, pick your own