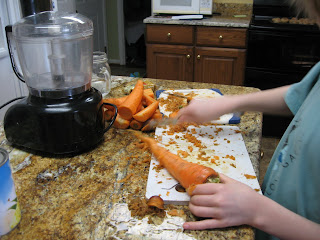 We are about halfway through our Winter CSA with Everblossom Farm in PA. This has turned out to be a great decision for us this year. Sometimes people complain with a CSA that they don't get enough food, or that they get way too  much of one thing. In my own experience, you can only do so much with zucchini, I think. Elaine of Everblossom Farm has done a great job of ensuring we are provided with a variety of produce and herbs for each of our pick-ups, though this all has to work within the confines of winter growth and root cellar storage. We chose to take 3/4 of a share, which for our family of three seems to have worked out really well. On the weeks we get the full share, we certainly have too much, but then it evens out the next time when we receive only a half share.

I took stock this weekend of where we stood with the CSA items. We have one butternut squash left, but started the season with six, so that is good. We had two quarts of potatoes and probably three pounds or more of carrots. We also had quite a bit of garlic, but again, I had completely stocked up on garlic before the Winter. There are a few things in the freezer, like leeks, but overall, we really are just talking potatoes and carrots.

I decided the potatoes were starting to be a bit soft and we better start making a bigger dent in the carrots, given we'll probably get  more next week! So, we converted the potatoes into gnocchi and the carrots into carrot cake. I had only made gnocchi once before, in a cooking class in Italy, and I hadn't really done very well. I'm not sure why that is. My instructor clearly thought my kneading skills were poor. This time I followed Jamie Oliver's recipe. After baking the potatoes in the oven, I ran them through the food mill to remove the skins and create a fine grade. Note to self, next time just peel the potatoes. The food mill requires a lot of effort to deskin potatoes. Things were actually pretty easy from there. An egg, nutmeg, salt, and a dash of flour. A bit of kneading, rolling out sausage links, and clipping with the scissors. I tested the mix in boiling water, and it held together and tasted great. Later that evening, I melted gorgonzola cheese in butter and half-n-half for decadent sauce and tossed in baked halibut chunks.

My son made the carrot cake for the most part, using a recipe we found on allrecipes.com. This was another first for us, and he remarked throughout how weird this cake was. In the end, it is quite delicious, particularly with a marscapone-butter icing. I think the use of crushed pineapple and apple sauce ensures that it is moist, but it wasn't too heavy.  In one fell swoop, we used three cups of grated carrots, which helps dig into the pounds of carrots in the fridge. That and a carrot salad taken from Moosewood Cookbook put us on track for carrot consumption for the week. More and we might turn a bit orange.

While we are in the lean weeks right now for the CSA, the rest of the group feels the same way we do. This was a great idea.