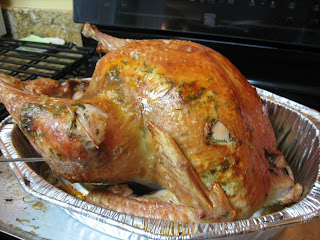 Our turkey yesterday turned out a great success, in spite of the dilemma of how to cook it. This year we purchased two local farm turkeys, one for Thanksgiving and another for Christmas. Both are heritage breeds. The bird I cooked yesterday was a bronze turkey from Green Akeys Farm, and our other is a Bourbon Red from Copper Penny Farm. If you look online for proper ways to cook heritage birds, you'll find two distinct camps: one that advocates low temperature roasting, and another the advocated high temperature roasting. I hadn't decided which road to take until I realized that it was almost noon and the low temperature version would require about ten hours for my 20+ lb bird. So, high temperature it was. Local Harvest recommends an oven temperature of 425-450 degrees F, but also cautions that you should not cook the turkey to the USDA recommended internal temperature of 165F. Their recommendation is somewhere between 140-150F. Last year, I found that the leg pulled away from the torso at about 155F and the meat was cooked thoroughly. That was my Christmas bird last year, which was about 14lbs. We also dry brined last year and this year, slitting holes in the skin and rubbing coarse salt everywhere we could reach the day before roasting, then washing that off before cooking.

So, I went with the high roast, and I also chose to use our convection oven. Because it's new. So, 400F on convection mode for 45 minutes, then, since the bird was cooking so unbelievably fast, I pulled it down to 350F. The turkey had hit 150F internally at about 1hr, 15 minutes! This is a 22lb bird. When I started carving it, I did find that the dark meat close in to the body wasn't fully cooked and popped it back in to the over for another 20 minutes or so. I overshot that time, with most of the meat hitting 165F, but it still came out fabulously juicy. Since our second bird is only 14+ lbs, I suspect it will only take an hour this way. In the end, better or worse than low temperature, or traditional roasting ? No idea. But it was a hit.

This bird from Green Akeys was frozen when I got it. That's because their turkeys were growing so fast that they would have exceeded forty pounds if they waited until Thanksgiving to process them. We had already had that experience last year. Craziness. Imagine getting a 42lb bird to roast. We named it Turkzilla. I was so stunned by the size of the turkey, that I took numerous photos comparing it to 2 liter bottles of soda and another 14.5lb turkey.


Those were broad breasted white, a common conventional breed, which grow so large that they are no longer able to reproduce naturally. They do have large breasts, giving lots of white meat, and so the local farm had grown them as an experiment, alongside a few heritage breeds. After last years fiasco, where they ended up with a number of giant Toms, they've converted to only heritage breeds. Though they do have broad breasted bronze, one of the two types of bronze turkeys on the market. According to wikipedia, these too grow so large that they can't reproduce and thereby are not true heritage birds. The chicks are from artificial insemination. They apparently have larger breasts than the standard bronze, which remains classified by that article as heritage, for what its worth. I'm not sure whether the bird yesterday was standard bronze or broad breasted bronze. It had decent white meat, but a lot more dark meat.

My other experiment was with the Blue Hubbard Squash I received from the Winter CSA. I had no ideas what to do with this large squash. I knew I wanted to try to make a soup. In Germany at this time of year, all the restaurants have amazing kerbis (pumpkin) soup, simply amazing. And I've found that butternut squash soup doesn't compare. Maybe the Blue Hubbard will. But the squash was huge, so I also to the farmer's advice and made a pie. The website allrecipes.com has a fantastic recipe for Blue Hubbard squash pie, and was basically the only one I found. It was as good or better than any other pumpkin pie I've had. Now I know to look for winter squash like that again. I'd post a picture, but it looks like pumpkin pie and we already ate half of it!
Posted by Unknown at 5:19 AM